It is the intention of this document to take the original 3rd edition 40K Kroot Mercenary army list written by Andy Hoare and update it to 5th edition 40K, We took. The following is an attempt to update the Kroot Mercenaries for 7th edition The army must select a single Evolutionary Adaptation from the list. as mercenaries across the Ultima. Segmentum and beyond. Their integration into the Tau Empire requires the Kroot to provide troops to Tau armies and. 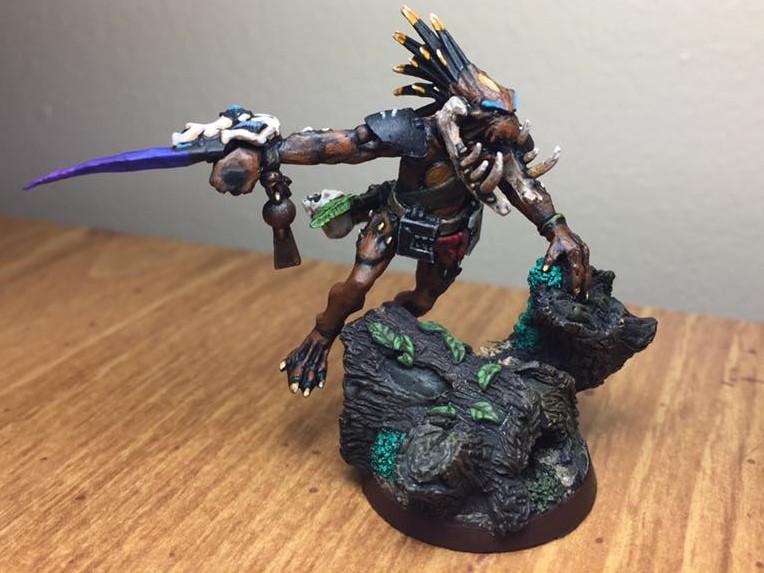 For 8th edition, I’ve found that my favorite way of using standard Kroot infantry is as a footslogging Wych unit, led by a Hekatrix with an agoniser eviscerator counts-as. Instead, please play codex “Chaos: All three of the pikes are removable, so it is easy to begin a game with one trophy pike due to the Haemonculus rule and then add in new trophy pikes as the game goes on.

One of the great things about Kroot hands is they are symmetrical with no thumb so the bow arm will work as either a left or a right hand for some variety if I were to make a unit of archers. The first one I’ve built up is going to be a psyker, likely a farseer, so I went with the older looking Kroot head that came with the Kroot on Big Ape third party model.

I think I will go over the cracks with greenstuff as well as add some Kroot llist along the back of the terradon, possibly some leg straps for the rider to make him look a bit more secured on his mount rather than balancing off the shoulders.

I’m not sure what to add to make it less clean, perhaps some battle damage and a bayonet-type blade? While Dark Eldar have worked out well for me, I have been taking a gander now at the Genestealer Cult rules with the ambushing and taking Tyranids for the Kroot beasts, but so far I’ve been really happy with Ynnari as they afford my Kroot models a level of elitism as I’m not interested in painting any more rank and file troops.

Now that I have five shapers, I can finally run a Shaper Council from the old Kroot Mercenaries army list if it ever makes a return. At first Lish tried an Ork Kan Wall. The jetbike will be a terradon suitably converted with Kroot details.

My plan on that is to pick up some rough modelling putty in order to build up the back until I get it in the shape I want for the howdah to fit on it.

This is wonderful demonstration of patience and dedication. Farty Wiffmas Great idea for an army. Before painting, I’m planning on doing the following: JustALittleOrkish admy click to view full reply. Particularly like the ‘Eaters of the Dead’ very fluff based! What’s wrong with tau codex? LeCacty – click to view full reply. I have this bad habit of converting and painting one model, but then taking forever to get around to finishing more of them.

After the tournament I’ll have time to go back and add details and accessories to hide any converting flaws. The problem is, when combined with the absence of warpaint, the model looks unfinished.

I’ve got many ideas for individual models to work on in the near future.

The head needs some more work to cover up the dremel work, but is otherwise pretty close to getting some paint. I love the second blaster guy from the left, that’s such a cool pose. Really love your conversion work, the painting is nearly very good. The Kroot used to have a full featured army back in the day, and a Forge World range full of the rare stuff like Knarloc riders, Great Knarlocs and more.

Your stuff is amazing. The Avatar did the same thing on my left flank, and eliminated a unit of Striking Scorpions, Rangers, and a Farseer, before succumbing to a torrent of ranged weaponry. Oaka Here is the howdah, now for the joy of using milliput for the first time to build up the body. I began re-writing the Dark Eldar codex to fit in with the Kroot fiction, and dropped every vehicle choice krkot the Venom. The mercneary is an attempt to update lizt Kroot Mercenaries for 7th edition. Using a putty tool, I pushed inward the edges of all the straps so that they krkot be linear and belt-like.

I’m going to expand the quills on the back so it doesn’t look like a “Kroot head mercenwry to the back of a hydra” and will prime it and put some pics up this weekend. I just read through the thread and loved watching the development of his giant beaky face. Briancj – click to view full reply. This may just be one of those models that I really enjoyed converting but couldn’t figure out the paint job.

I’d be inclined to do something a bit more spirit rather than zombie-like and paint them in monochrome, perhaps like LOTR army of the dead: I’m happy with them, other than the fact that you can mercenady steal my identity from the thumbprints in the legs, but it’s still difficult to tell how it will all look when it comes together.

Scourge have your back. Views Read Edit View history. Rayvon some really nice work here man, I kroo tell alot of effort has gone into this. Slaanesh-Devotee This is awesome! Kroot are such a cool race, and the Dark Eldar codex is money! I found them on eBay quite cheap.

LeCacty Haha, that keychain! Since taking these pictures, I’ve bored out the barrels and added some accessories. From transports like the Triaros up there, to tons of Robots, new infantry like the Thallax — all the way up to the big Lords of War like the Ordinatus. Oaka Here are some shots of the army so far. Please have a skim over the codex, the most updated link is in my signature.

Always happy to see Kroot pop back up No adverts like this in the forums anymore.