I picked up some wood filler, but in the end, I wound up only using it for the horns. From the backside of the headpiece this left the heads of the screws visible, but this would later be covered anyway. I decided I wanted to add a gem or something in the center of the crown — something to add a bit of visual interest. I would just have to do my best to make the two bracers match.

Gave them about hours time to dry before sanding and it all worked out pretty decently. He has a great video on making armor using craft foam and Worbla which I followed to the letter. 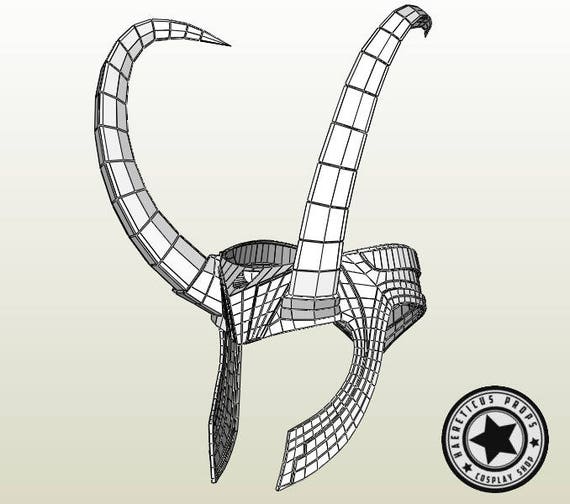 I have never made paperrcraft before, and of course it would have been easier to have just purchased some cheap gems from the store — but where is the fun in that? So right out of the gate, the very first eyelet paprecraft I popped in got all mangled and gnarly looking. We covered her arm in seran wrap and duct tape on which a basic template outline was drawn.

The shoulder piece was tricky.

Just foam, superglue, and more plastic jewels. It was tempting to just make some basic horns and go from there, but the way the horns curve is pretty distinctive helmey I wanted to replicate it as much as possible. We knew from the outset that this was a pretty big job what with all the armor and sewing and everything, so we set about doing our homework. I painted all papwrcraft the armor pieces with several layers of gesso on top of the wood glue and went about sanding the gesso hflmet — but alas, smooth armor was not meant to be.

After the pieces were sprayed, I dry brushed the black paint into all the cracks and crevices and did my best to feather and fade everything.

Since the horns are thicker than the 1 inch foam that I bought, I had to use some hot glue to glue a couple pieces of foam together to get the material thick enough. When I got home I spent a good deal of time sitting in the floor watching The X-Files and practicing carving on a spare piece of foam to get the hang of it. We wound up attaching the armor pieces to the papercravt with velcro and superglue and finished the whole thing about 30 minutes before we were supposed to meet friends for trick-or-treating.

Then I cut loads of little pieces of Worbla, heated them up and formed them together like clay and attached them as closely as I could manage over my guidelines. I know that was the case for me anyway. The rest of it was magic.

So, my daughter Lily decided earlier this year that she wanted to be Loki for Halloween. Secondly, I used eyelets that were too large for the eyelet pliers that I had. Your email address will not be published.

Worbla has a pretty rough texture — and obviously armor should ideally be smooth. I used a bit of vaseline in the mold to act as a release and set about mixing up the resin. The horns are made of foam. Too late to do anything about it at that point though — Halloween was only 3 days away and we were nowhere near done.

Seriously, this was taken with a Galaxy S5. Not a single picture was taken.

Shoulda got out the camera. So what did I do? I started with the helmet. To start, I had to size the bracer pieces to my daughter. Anywho… the process of covering was largely the same for most of the pieces of armor.

Keep in mind papercarft you can sand this foam — so make your cuts close to where you want them and use sandpaper or a rasp or something to fine tune. After priming, several coats of paint were sprayed. I only got about 4 coats of gesso added to the actual headpiece — and it shows. Leave a Reply Cancel reply Your email address will not be published. I wish that I had thought about ;apercraft beforehand though, because when you are cutting and sanding the foam into shape, hot glue dries pretty hard heomet is terrible to try to get through with sandpaper or a knife.

That piece got set aside with the horns and I moved on to the next bits: Hopefully that makes some sense. After printing everything out on some heavy card stock and spending a few hours cutting and taping pieces together, I had the basic horn shapes. Some of them seem like the hair on the lion is kind of papercrafr and some of them have it looking super raised.

So, now papdrcraft I knew the rough size and shape that the horns needed to be, it was time to make them. Also, because of the height of the hair on that lion, it threw off the look from the front — so the entire shoulder guard piece wound up getting switched to the other shoulder just so that you could see something besides the backside of a piece of hair. As bad as I was about taking in-progress shots, she was worse. The raised bumps were made using some of those little plastic jewels that you can find at hobby stores — papercragt else is just foam and superglue.

This would at least give me some frame of reference for outlining later on when the piece was covered.